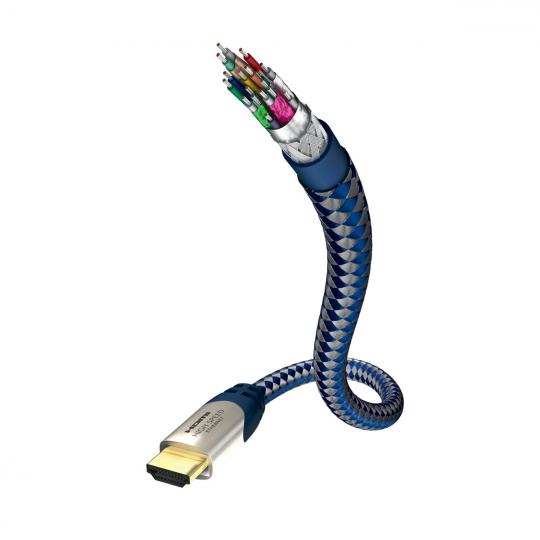 Conductors made of high-purity OFC

This High Speed HDMI cable with Ethernet (from 8,0m length Standard HDMI cable with Ethernet) from the in-akustik Premium-series supports all HD audioformats and a resolution of up to 2160p 4k ( from 8,0m 1080p Full HD). The solid data lines are triple-shielded. 24c gold-plated contacts ensure an optimum digital transmission. It is suitable for connecting digital AV components, such as DVD, HD-DVD and Blu-ray players or game consoles with a plasma, LCD, LED-TV or projector.

The latest version of the HDMI® standard establishes critical infrastructure for implementing 3D video in the home, defining input/output protocols that will allow 3D displays and source devices to communicate through an HDMI® link. It’s a major milestone on the path to bringing true 3D gaming and 3D home theater to the mass market, supporting resolutions up to 1080p in 3D. 3D technology is evolving rapidly, with several competing approaches under development, so the HDMI® 1.4 specification establishes protocols for a number of popular 3D display methods, including: - Frame, line or field alternative methods - Side by side methods (full and half) - 2D plus depth methods