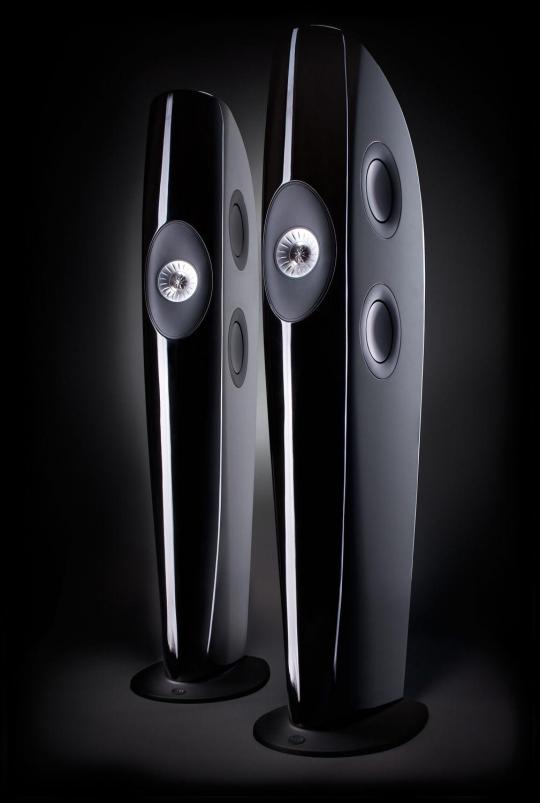 BLADE is the result of KEF's best and brightest engineers being given free rein to create the ultimate loudspeaker without design or cost limitations. The BLADE concept took years to come to fruition but resulted in a loudspeaker that looks and sounds like no other, the next challenge was to turn it into a product that music lovers could own and enjoy.

BLADE and BLADE TWO share a new architecture that achieves the ideal point source. The four bass drivers (225mm/9-in. for BLADE, 165mm/6.5-in. for BLADE TWO) are arranged so that their combined acoustic centre occupies exactly the same point in space as that of the Uni-Q HF/MF array. This means that the sound escapes the cabinet as if it weren't there and creates truly holographic imaging.

Just as KEF's philosophy has always been to innovate in pursuit of the most accurate and realistic sound, BLADE loudspeakers create a spectacularly warm and expansive sound that draws you in to the music. Totally natural and effortlessly accurate, they are as emotionally inspiring as a live performance.

Frosted Blue, which hints at the blue of the original KEF logo, and Frosted Copper Black - the Kent Engineering and Foundry editions combine BLADE technology with an aesthetic that subtly evokes this rich pedigree. We can also match a colour of your choice. Like everything else about BLADE and BLADE TWO, it's about getting every last detail absolutely right.

The challenge was to design an acoustically efficient enclosure for a speaker whose unique driver configuration requires large capacity at the upper portion, without looking bulky.

Initially, we worked alongside Eric Chan of New York-based ECCO Design to create a distinctive visual identity to match BLADE's towering performance. The resulting cabinet form was inspired by Brancusi’s seminal Modernist masterpiece Bird in Space. Tapering gracefully from top to bottom and from front to rear, the slim proportions made possible by the orientation of the bass drivers give the BLADE and BLADE TWO a sculptural presence in their own right.

Sound from a single source is inherently clear. BLADE's treble and midrange drivers share the same axis and the four bass drivers are mounted such that their acoustic centres are in exactly the same spot.

This single apparent source configuration is what makes BLADE and BLADE TWO so incredibly coherent.

BLADE's bass drivers are mounted in discrete chambers. This increases the frequency of internal standing waves to way beyond the crossover point and reduces the need for damping materials (which can impair bass quality). Nothing has been overlooked in the quest for ultimate clarity.

To avoid dissipating the energy of such potent bass drivers by exciting the cabinet, the large kinetic forces involved are cancelled out by mounting the drivers rigidly back-to-back.

Two pairs of the finest audiophile WBT terminals for bi-wiring or bi-amping optimise the retrieval of low level detail from the signal in the speaker cable. Patented screw-in linking plugs offer a high spec and simplified alternative to wiring links.

The simple low order crossovers specified for both BLADE and BLADE TWO employ the best components available. These are carefully selected by a rigorous auditioning process so that every part of the signal path is fine-tuned for maximum clarity.

All the crossover components are individually wired by hand rather than mounted on a conventional printed circuit board. As well as being more environmentally friendly, this optimises both reliability and sound quality by assuring the cleanest possible signal transmission.