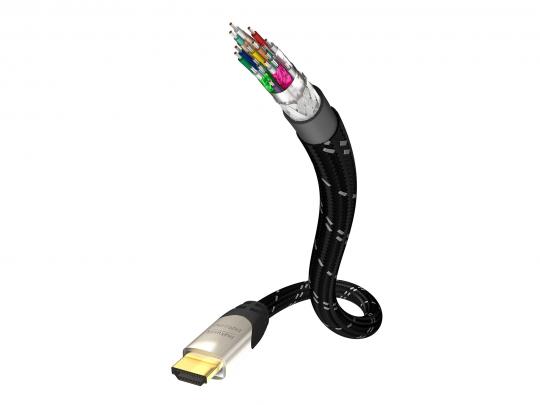 Conductors made of high-purity OFC copper

The Excellence High Speed HDMI® cable is specially designed for the high requirements of ultra high resolution formats (4K UHD) and transmits the required data rates of up to 18 Gbps. A 3-fold shielding protects the sensitive data content against external interferences. The thick signal conductor as well as the high-quality plug reduce additional data errors to a minimum. For excellent picture and sound quality. From 7.5 m length a specially chip is integrated in the plug, which ensures the 18 Gbps bandwidth even with 15 m cable length.

The latest version of the HDMI® standard establishes critical infrastructure for implementing 3D video in the home, defining input/output protocols that will allow 3D displays and source devices to communicate through an HDMI® link. It’s a major milestone on the path to bringing true 3D gaming and 3D home theater to the mass market, supporting resolutions up to 2160p in 3D. 3D technology is evolving rapidly, with several competing approaches under development, so the HDMI® 2.0 specification establishes protocols for a number of popular 3D display methods, including: - Frame, line or field alternative methods - Side by side methods (full and half) - 2D plus depth methods .